How to have Simultaneous Orgasms

It’s the Holy Grail of straight sex: simultaneous orgasms. How many romantic films and TV shows have you seen that don’t depict the (usually young, white, non-disabled, conventionally attractive) hetero couple coming triumphantly at exactly the same time, often during their very first night together?

But surprise surprise, this scenario is not so common in real life. This study suggests that less than a third of women achieve orgasm through penis-in-vagina sex alone, and this one finds that large numbers of penis owners experience either delayed or premature ejaculation. So it’s statistically pretty unlikely that both your orgasm trains are gonna pass through the tunnel at the same time.

Generally speaking, we’re against the idea that anything is a must in sex. And our blog aims to take the pressure off people to have sex and orgasms in traditional ways. So at HO Towers we’d never looked very closely at the idea of simultaneous orgasms. But when the reviews of our ATOM cock rings started to come in, we had a bit of a rethink.

Girl on the Net (in a very funny not-exactly-review that we recommend) stated:

One of the potential massive benefits of this cock ring is it makes it so easy for me to come that I can almost certainly use it to get back into the swing of timing it so we both come at once: I can grind, then as I get close and let him know I’m about to get there, he can begin fucking me like I’m in trouble and then spaff just as my cunt starts to clench.

And Sex Machine Reviews said that after a few goes with the ATOM PLUS:

We have now got the hang of reading each other and efficiently communicating so we can time our orgasms to happen simultaneously and that is honestly mind-blowing. 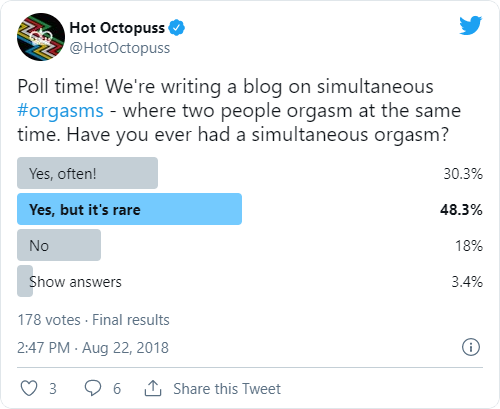 As you can see, only about one in five respondents had never had a simultaneous orgasm. Nearly half had experienced it, if not regularly. But perhaps most surprisingly of all, nearly a third said they had simultaneous orgasms ‘often’. The tweet was followed by a number of people very generously sharing their top tips for achieving this state.

Now we understand that our Twitter audience may not be the most representative sample of the general population. But it still gives us hope – and some sexy stories. So we’ve condensed our conversations down into five top tips for achieving simultaneous orgasm, if that’s your kind of thing. With shoutouts to all the satisfied souls who helped us along the way.

Simultaneous orgasms tip 1: warm-up is everything

‘For us, it’s all about the foreplay,’ says Chaste Boi. And several other tweeters agreed that, for vulva owners, preparation is essential for getting into the simultaneous orgasm zone.

According to blogger Married Sex Toys, ‘it’s on nights dedicated to her. She’ll be tied down, and through various toys and tricks, she’ll have multiple orgasms. By the time she’s had enough, I will time my strokes with her body movements until we both orgasm at the same time. When timed right, it’s so sexy.’

The more time you spend on build up, the easier it is to tip over the edge at the right moment.

For penis owners, the most popular tip seems to be: get used to holding back until coming on demand is easy.

Sex writer Nicole Guappone told us: ‘Having a penis and knowing how to “edge” can be helpful, as you can try to hold it off till the other person is ready, then push yourself over.’

However, it’s a tip that can work for vulva owners too. Submiss34F told us: ‘I’m lucky that I don’t struggle to come and can hold it off for a short while. Apparently while I’m waiting I get tighter and tighter then when he knows he’s about to come he gives me permission and then it’s often simultaneous.’ Nice.

We’ve been writing so much about edging recently we’ll be doing a full blog post on the subject soon, but for now here’s a quick summary from Metro.

Given the stats above, you’re making it very difficult if you insist that the only ‘real’ simultaneous orgasm takes place purely via penis-in-vagina sex. Oh, and it opens up a can of worms by suggesting that ‘real’ sex is only available to straight couples – let’s not go there.

It’s very common for vulva-owners to need clitoral stimulation in order to achieve orgasm. One of the most tried-and-tested means of simultaneous orgasm is using a wand vibrator during sex to hasten orgasm for the vulva owner. Sex blogger Tawney Darling said: ‘I’ll put the hitachi (or other favorite toy) on my clitoris while my husband is inside me. I get close first and with the combined vibrations on him and speeding up at that point we can often finish at the same time or close.’ And Backwoods Bedroom told us: ‘toys are a huge part of how we accomplish this’.

If a penis-owner needs a boost, adding a butt plug or cock ring can be very helpful.

Most agree that good communication, and familiarity with each others’ bodies and minds, are important for simultaneous orgasm – ‘sexual syncing’ as Hanna Sex Fairy Reviews calls it. Different people achieve this in different ways. For D/s couples, the power play of asking or giving permission to orgasm is important, for example.

Top UK sex blogger Cara Sutra, in a post she shared with us, explains that sexting and ‘hands-off’ games for 8-10 hours before sex can bring her and her partner to the point where simultaneous orgasms come easy. ‘I need to be seduced… mentally as well as physically – in fact, the mental aspect is much more important for me in a partnered sex situation,’ she explains.

As Cara wisely says, the more you worry about achieving a particular ‘sex goal’, the less likely you are to get there, and the less enjoyment you’ll have along the way. While she and her partner do experience simultaneous orgasms (read the post for some sexy anecdotes about how), this is her main takeaway:

"Sex should be a time where you don’t have to worry… A long time ago I learned that the less worry I endure during sex the more I can actually get on and enjoy it. I have resigned my worries of even if I’m going to orgasm, never mind trying to plan exactly when that will happen… For those desperate to achieve simultaneous orgasms, who feel like failures during sex when it consistently doesn’t happen? Stop. Re-evaluate your sexual priorities and I feel certain that orgasming at the same time as your partner will actually be pretty low on the list, if it remains at all."

So our updated take on simultaneous orgasms is this: it isn’t essential, but it is both possible and fun. It just might look a bit different from the film and TV tropes you’re used to. And that is our take on basically all kinds of love and sex, full stop.

Got any more simultaneous orgasm tips? Share them in the comments.

Since our Twitter conversations were mainly about penis-in-vagina sex, we’d love to hear from people who don’t have sex that way. Are simultaneous orgasms important to you and how do achieve them?