Tips For Dating A Non-Binary Person On Grindr

Thinking of dating a non-binary person? Spotted someone on Grindr or other dating app but not sure how to chat to them without getting it wrong? Ben Pechey offers some tips.

There’s no denying it: since its creation in 2009, Grindr has changed the dating landscape for many in the queer community. The original hookup app has made it easy for trans, bi, gay and queer people to meet like-minded folx for dates, fun and more. The location-based service means that it’s the easiest and quickest dating app: if you download it right now, odds are you could meet someone in half an hour. Sounds like queer love life utopia right?

Well, kind of. For many people, sex and sexuality appear to offer only gender binary options: you like men, you like women, or you like men and women. But what happens when your gender identity sits outside that binary? On apps like Grindr, this is when things can become less than ideal.

If you’re cisgender (i.e. you identify with the gender you were assigned at birth), you’re either male or female – gender is a binary thing. But for me, as a non-binary person, gender is a sliding scale of all elements of gender, an amalgamation of personality traits, likes and dislikes. It’s less about a mix of blue and pink, but more how I feel at any given moment. It’s hard to define because it’s not fixed.

I’m attracted to men, and so Grindr is the app that best fits my needs and desires. But as a non-binary person, Grindr can be a tricky thing to navigate, and I’ve had a few awkward encounters with people who didn’t know how to deal with my identity. So here are my top things to remember if you are interested in dating a non-binary person on Grindr (or any other app).

1. Non-binary people are not Google

As a cisgender person on Grindr, this may be your first interaction with a non-binary person, and quite understandably you may have many questions. Sometimes people have approached me with questions that are tactful and polite, but unfortunately eight times out of 10, they’ve been a bit too personal.

It’s easier for everyone if you get your bearings on non-binary gender by googling it, and then once you have grasped the basics, get to know the person you are chatting to like you would any cis person. Here’s a good place to start to learn about the basics of non-binary gender.

2. Our definition of our gender identity is NEVER wrong

One of the human body’s natural responses to new situations is ‘fight or flight’ mode, when your nervous system is aroused and you’re feeling defensive, ready to be aggressive or to run. As a non-binary person, I have received a lot of messages on apps that seem to have been sent by someone who is in ‘fight mode’ – they’re perhaps feeling confused or threatened by this gender identity they’ve never experienced before. Sometimes they might question my identity altogether. It’s not a good way to start a conversation that you hope might lead to fun, sexy times!

It often takes non-binary people a long time to figure out their gender identity, and in the course of that they may have been given a lot of messages that their identity isn’t OK, doesn’t exist, or that there’s something wrong with them. This can be very damaging and traumatic.

If you are confused, voice it, but never correct, or assume you know best. Comments like ‘you’re just a drag queen’ can set people back a long way.

The great thing about Grindr is that you can see lots of profiles at once. Profile pictures allow you to work out who you want to talk to, and we all use them as an initial guide to interest. I understand that my gender identity can confuse, but please don’t message me to tell me to ‘get off the app, it’s for men looking for men only’.

Grindr is an app for so much more than that, let’s all work to leave #Masc4Masc culture in the past.

The opposite of the #Masc4Masc messages are the messages that treat non-binary people like objects. I appreciate that we all have things that we’re into, but NB people are not and never will be just objects for your sexual satisfaction. You can appreciate the way we look, but we have needs and desires that need fulfilling too, and we wouldn’t be on the app if we weren’t!

Please leave space for a relationship and not a one-sided interaction. If you’re thinking of dating a non-binary person purely to fulfil your desires, it comes across in your messages and we can tell you don’t have respect for our needs too.

If I had a pound for every time I answered a message, to be ignored for eternity on replying, I would be rich enough to make my very own dating app. Many cis guys are curious, will message because they want to know if you are trans, and when you reply that you’re non-binary, they simply don’t reply.

When sex positions and interests aren’t compatible, most times, guys will respond and clarify what they are looking for. Make sure that if you do message a non-binary person, that you give them the respect they deserve and reply to their response no matter what you are looking for! We’re all human after all.

In general, the best advice I can give you for dating a non-binary person on Grindr is very simple (and it’s just what I would say about approaching anyone): treat them as you would want to be treated, with respect and kindness.

Turbocharge your stroking with the power of Pocket PULSE. This male sex toy is our most lightweight and compact Guybrator™ yet. Its dual motors deliver deep and rumbly vibrations allowing yo... 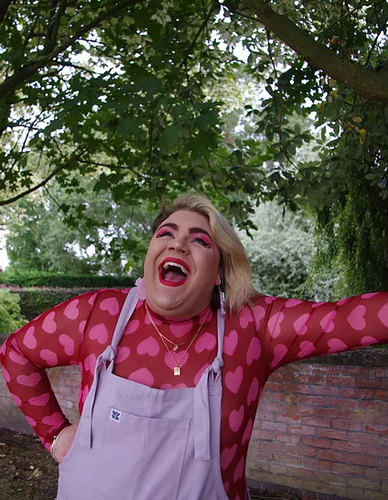 Ben Pechey is a non binary writer, fashion critic, proud Leo and LGBTQ+ Activist. They aim to uplift and educate through media. They run their own website, host The Happy Place podcast and deliver education and laughter daily via their legendary Instagram Stories.

Ben Pechey is a non binary writer, fashion critic, proud Leo and LGBTQ+ Activist. They aim to uplift and educate through media. They run their own website, host The Happy Place podcast and deliver education and laughter daily via their legendary Instagram Stories.