Let’s face it, the words ‘DIY’ and ‘sex toy’ go together about as well as ‘vodka’ and ‘snowboarding.’ The two should never mix, and you can guarantee that if they do someone’s going to get seriously hurt. But that doesn’t stop some people from pressing on regardless.

So, with thanks to a few choice comments on reddit, and some X-rated ‘how-to’ guides that should never have been written, we present a few of the worst DIY sex toys ever. From the slightly weird to the downright dangerous through the just-plain-not-that-sexy.

Don’t try any of this at home.

Still, it has the benefit of at least not being life-threatening.

“Unroll a condom and put it where the cardboard roll used to be, then take the open end and stretch it around the roll of toilet paper being careful not to tear it. The pressure should clamp the toilet paper together forming a vertical slit that looks like a vagina.”

Editor’s note: does not look anything like a vagina.

There’s nothing we can say to this idea except: nope.

“I wanted to stick something in my *** so I went to the hardware store and bought a screwdriver with the longest, smoothest handle that they had.”

“Outside of black widow spiders, it’s not often acceptable to eat your partner immediately after sex. But if your sexual partner is a melon, why not?”

Well, we could think of 100 reasons not to make this kind of DIY sex toy, even if it does happen to be popular with broke students. Most pressing reason being ‘because it’s not fun. At all.’

Variations of the fruit-based DIY sex toy include banana skin. Reasons not to try it?

Other options include cutting holes in papaya and melon, although sadly these DIY sex toys are equally fruit-ile if what you’re looking for is anything other than a lot of effort for a potentially dangerous disappointment.

Danger rating: medium. Not just from slipping on the banana skin, either – some websites report people trying to ‘warm’ their DIY sex toy before use and causing painful burns to their penis.

Sponges in a cup

Let’s try and end on a light-hearted note, so that none of you end up with screwdriver-related nightmares. This toy is perhaps not the most dangerous in the world, but it’s certainly far from being one anyone would be proud to put on their nightstand.

Sexiness rating: as sexy as doing the dishes with your penis, i.e. not.

It would be cruel of us to post this blog without offering a much better sex toy suggestion. After all, if you’re keen to get off and not sure where to look for inspiration, we wouldn’t want you picking up a random internet how-to guide and doing yourself an injury in your quest for an awesome orgasm.

Proper, safe sex toys: every man should have one

Great male sex toys – such as the PULSE SOLO ESSENTIAL – are easy to get hold of, and they’ll last a hell of a lot longer than anything you cobble together from stuff you’ve found in the cupboards.

What’s more, PULSE SOLO ESSENTIAL is expertly engineered to give you the maximum pleasure: it delivers oscillating vibrations through the head and shaft of your penis, giving you the kind of mind-blowing orgasms you’ve probably never experienced before. It can be used with or without lube, is completely body-safe, waterproof, and as an added bonus it looks like nothing you’ve seen before.

Instead of a screwdriver. Something much more orgasmic to put up your butt would be PleX with flex. Plex is made from body-safe silicone (unlike screwdrivers), has a remote for easy operation and dual-motor Treble and Bass TechnologyTM so you can tune the vibrations for the best sensation. 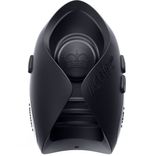