We want to give you an overview of some different types of clitoral stimulation – whether you’re planning to use these techniques on yourself or you want to learn more about how to give someone else amazing orgasms.

This is perhaps the most obvious stimulation distinction: manual stimulation versus use of a sex toy. But it’s a false ‘either/or’ distinction: there are many sex toys on the market that provide clitoral stimulation, and the sensations they give can vary greatly. What’s more, when it comes to preferences, you don’t have to choose one or the other: having a selection of sex toys that give different kinds of clitoral stimulation, combined with using your (or your partner’s!) hands for clit stim means you can explore the whole world of wanking without having to pick a side.

They cover things like edging (where you build to almost-orgasm then pause, then repeat the build-up until you orgasm) as well as the differences between consistency (where you require the same pressure and speed in order to build to orgasm) and hinting (where you tease around your clitoris, and only occasionally touch it directly) as well as many others.

You may have heard people talking about the difference between a ‘buzz’ and a ‘rumble’ – the former being a higher frequency sensation, and the other providing a lower, deeper feeling. The ‘buzz’ tends to come more from lighter sex toys like bullet vibes, where the ‘rumble’ is more common in larger toys like wands.

Although generally most people talk about ‘buzz’ as a negative thing, some people do prefer that higher-frequency buzz to a low-pitch rumble, and what you enjoy will depend a lot on your own physiology and personal preferences.

The other key aspect of sex toy stimulation is whether you like steady clitoral stimulation, or you prefer patterns that build you up to orgasm. There are parallels here with the OMGYes research, which found that while some people prefer consistent stimulation, others will use random patterns of taps or rubs on or around their clitoris to give a more varied sensation. 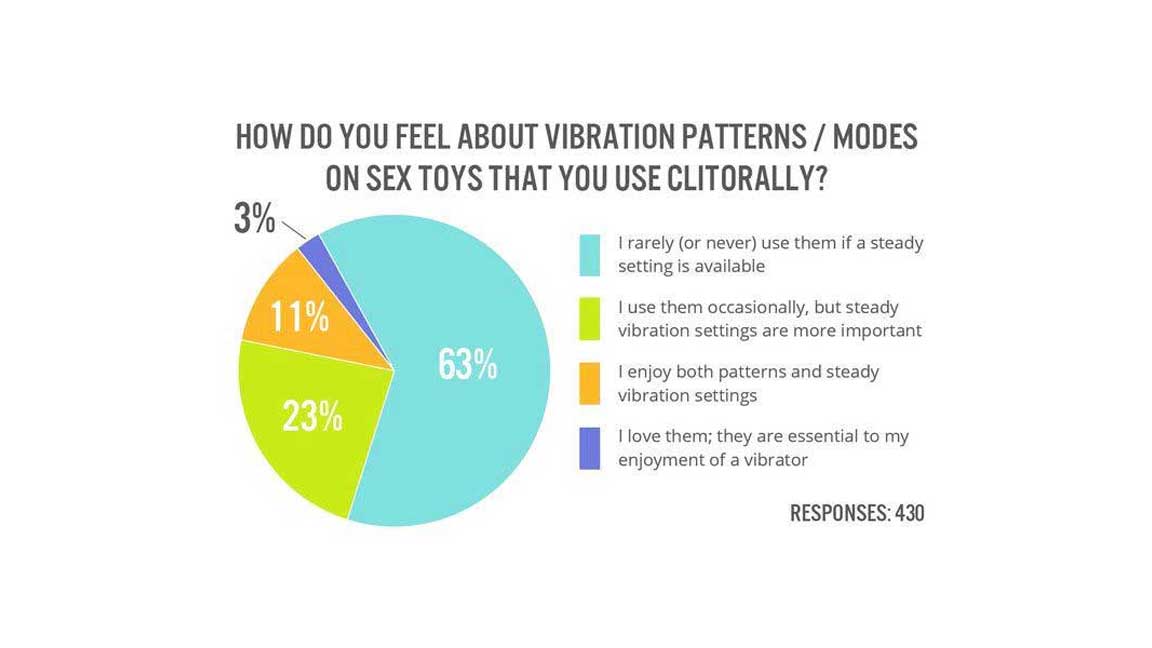 Sex blogger Epiphora tests sex toys regularly and was curious about this difference between patterns and consistency, so she surveyed readers of her blog. These days it’s pretty standard for sex toys to include some kind of pattern setting alongside the regular settings which you can just turn up and down to control intensity. In her survey, Epiphora found that a whopping 63% of people tended to prefer steady settings, saying they rarely or never used the pattern settings on toys.

That’s not to say that patterns aren’t important – as a sex toy maker we’d never want to ignore the 13% of people who enjoy them! But it is intriguing to see how one person’s turn-on can be someone else’s turn-off. The message to take from this survey is that a ‘pattern-only’ toy would only cater to a small proportion of people, so get yourself a toy that can do both!

For a long time we at Hot Octopuss have delivered oscillations to people using the PulsePlate™. It was developed after one of our founders – Adam Lewis – read an article in a medical journal about these unique oscillations being used to provoke ejaculation in men who otherwise weren’t able to orgasm. At the time it was used in IVF treatment, to help men with severe spinal injuries have children. However, Adam realised that if you could capture this unique technology and put it in an affordable sex toy, oscillations could be used by anyone to enhance their sex and masturbation. That’s how PULSE was born – a sex toy designed to wrap around the penis and deliver these unique oscillating sensations from the head right down the shaft.

Clitoral stimulation: variety is the spice of life!

So whether you prefer patterns or steady stimulation, manual or sex toy, deep or buzzy, hopefully, this guide has opened your eyes to at least one new method of clitoral stimulation. While it’s easy to stick to what you know, there is a whole world of varied and pleasurable stimulation out there, and if we can inspire a few of you to test out a new technique you like the sound of, then our work here is very much done.